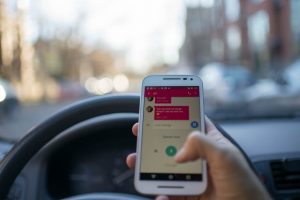 Hopefully by now we are all aware of the dangers associated with that icon of the twenty-first century living: the cell phone. Can these ubiquitous devices be bad for your health? The good news is that according to experts the outlook is a pretty good if you worried about your phone causing cancer. The bad news, though, is that they are potentially dangerous if used inappropriately while driving.

The problem is distraction. Distracted driving occurs when something pulls the driver’s attention away from what they are presumably supposed to be doing. It may be a conversation with a passenger, or watching some passer-by, or fiddling with your cell phone. Researchers in one study found that, in a driving simulation, cell phone users were more prone to rear-end collisions and unresponsive driving than subjects who had had a few drinks.

Of course, driving in a simulation isn’t the same as driving on a real road, and you could always put your cell phone down, whereas you can’t sober yourself up on demand. But there is growing evidence that things that vie for our attention while driving impact our ability to drive safely.

What about drivers who use bluetooth or “hands-free” devices, though? Several simulator studies have reported that drivers using hands-free devices are no better off than those with a phone held to their ear. In fact, the hands-free crowd often seems to drive faster in simulators, and shows slower reaction times. Researchers think that using cell phones hands-free makes drivers believe that they are less distracted and they actually are. But this is in simulators. On the road, things get a little bit more complicated. Research on drivers in real cars driving on real roads suggests that the additional risk associated with talking on a cell phone, whether handheld or hands-free, is quite low.

On the other hand, texting or anything that takes your eyes off the road for around two seconds or more, has a dramatic impact on additional risk. One study on drivers on real roads found texting while driving increased the risk of a serious incident by over twenty times. The bottom line is that cell phones can be bad for you if you let them get in the way of what you’re supposed to be doing. Especially if that thing is already potentially dangerous. So please, keep your eyes  and attention on the road and not your phone.

For more information on distracted driving in Colorado and what distraction does to the brain click here!