Cell Phone Use and Driving

As a parent, you know one of the most dangerous and tempting distractions to teen drivers are cell phones. But did you know that talking and texting while behind the wheel can be deadly? About 1.2 million car crashes in 2013 involved drivers talking on phones, according to the National Safety Council, and at least 341,000 involved text messaging – and that was FOUR YEARS ago!

Consider these other important texting and driving facts when discussing this crash risk with your new teen driver:

BE A ROLE MODEL!  What Parents Can Do

Parents need to model safe driving behaviors by not using their cell phones while driving (including at stoplights) and to set a zero tolerance policy for their teens’ cell phone use while driving. They should help their teens by giving them safe alternatives to talking or texting while driving like: 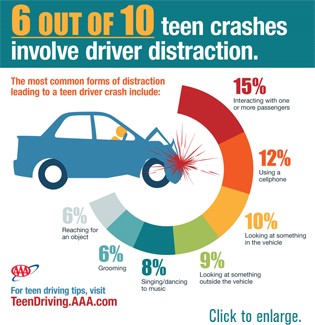 The most comprehensive research ever conducted into crash videos of teen drivers has found significant evidence that distracted driving is likely much more serious a problem than previously known, according to the AAA Foundation for Traffic Safety. The unprecedented video analysis finds that distraction was a factor in nearly 6 out of 10 moderate-to-severe teen crashes.

Researchers analyzed the six seconds leading up to a crash in nearly 1,700 videos of teen drivers taken from in-vehicle event recorders. The results showed that distraction was a factor in 58 percent of all crashes studied, including 89 percent of road-departure crashes and 76 percent of rear-end crashes. Click here for the full AAA news release.

The most common forms of distraction leading up to a crash by a teen driver included:

Preventing Impaired Driving in Your Teen

Alcohol isn’t just illegal for teenagers to consume—it can be deadly if they drink and drive. In fact, drunk driving is one of the most frequent causes of death among teens. Alcohol impairs most of the skills that young drivers need the most, such as their reaction time, their vision, and their judgment.

According to the Colorado Department of Public Health and Environment: